The Race Disparity Unit has today published the first in a series of summaries of data from the ‘Ethnicity facts and figures’ website.

This first summary shows a range of facts and figures about Black Caribbean people in England and Wales. 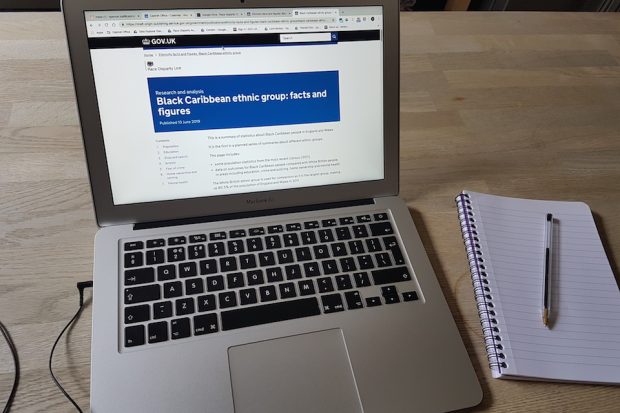 Purpose of this series of summary reports

The Ethnicity facts and figures website contains a wealth of data - over 170 web pages - with detailed analyses about aspects of health, education, crime, employment, and housing.

While this mass of data is invaluable in helping identify specific outcomes or experiences where there may be ethnic disparities, it’s also fair to say that it makes it difficult to get an overview. As we add more data to the website, it's increasingly hard to see the wood for the trees.

Feedback on the website suggests that people want a relatively brief overview of what the data is telling us.  In response to this, we are developing two types of summaries. The first of these, about the Black Caribbean group, illustrates how we intend to summarise the data for the different ethnic groups. These will answer the question “from the data on the website, what are the main issues facing each ethnic group?”.

The second type of summary reports will be topic based. These will answer the question “what are most notable ethnic disparities in each aspect of society and public service provision?” We are currently working on the first such topic report - on Crime and Policing, which we hope to publish in the coming weeks.

We have had to make a series of choices in preparing the ethnic group summary reports. This section explains our reasoning.

First, what level of ethnicity should we be aiming to describe? Should we be reporting on the five broad groups (Asian, Black, Mixed, White, Other) or the more detailed categorisation (into 18 ethnic groups), as used in the Census? In making this decision we balanced two considerations. On the one hand, we have more and better data about the five broad groups. On the other hand, these groups are typically very heterogeneous. We concluded that there was most value in providing what we were able to about the detailed groups. However, if there is user interest we will consider producing summary reports for the five main groups, to provide a more comprehensive picture.

Second, which ethnic group do we use as the comparator group? In other words, we present data for the Black Caribbean group but, to put this data into context, which other group(s) should we compare with?

We considered whether to make comparisons with the total population, and with the White British group. We considered that comparisons with the White British group was most helpful, because this is the largest single group in England & Wales. This was also preferred over comparing an ethnic group to the average for the population as a whole - this tends to dilute differences between ethnic groups since each of these contributes to the average.

Third, how do we select which data to include in the summary report? Clearly there’s little point in describing all of the data we have on the Black Caribbean group, as we would then not be providing an accessible summary! In selecting what to include we have sought to highlight the most noteworthy differences observed between the two groups, where they are considered statistically reliable

Fourth, should we only include data on the website, or should we include data published elsewhere? For practical purposes we decided to focus on data available or forthcoming on Ethnicity facts and figures. But we have offered some additional digest of the findings such as bringing together data on the three forms of tenure (home ownership, and renting from social or from private landlords), illustrating the age profile and contrasting it with that of White British people, and presenting a map which brings to life data on the places where people in the ethnic group live.

And fifth, what data should we link to? The Black Caribbean ethnicity report gives a snapshot based on the most up-to-date data available at the time we prepared the report. Unlike Ethnicity facts and figures, the report won’t be kept updated. So we had to consider whether to link from the report to either:

We decided to link to the specific data quoted in the report. This will avoid confusion in the future if a user follows a link from the report to a page on our website that has since been updated (and may show different figures).

We would be interested in your views about the Black Caribbean summary report, and also on the design choices we have made. These will help us refine future reports.